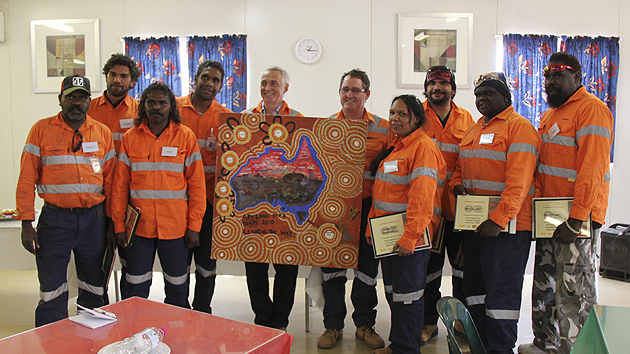 Industry qualifications, through this program, have now been gained by 51 local and Indigenous graduates and 40 of these graduates are still working at Prominent Hill. 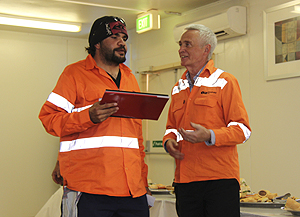 OZ Minerals CEO Terry Burgess commented “What has been special about this particular program is that we have been able to offer full-time roles to people in communities that have had limited employment opportunities. In fact to our knowledge, no mining company has ever offered a training program in the APY Lands with guaranteed employment outcomes.”

“It has always been our aim to employ as many local people as possible. As well being one of the best ways to share benefits with the community it makes business sense as local people are likely to stay in the workforce for longer.”

Trainee roles that these new graduates have moved into include mine geology pit technician, exploration technician, processing technician, health and safety officer and administration officer.

Derryn Gibson comes from Ernabella (Pukatja) community. He has gained a position in the Health and Safety team and explains, “This is my first full-time mining job, I could see how my uncle had benefited from working in mining and I want that for myself.”

Delivering success in programs such as this does not happen without collaboration and the 2010 program involved the TAFE Aboriginal Access Center in Port Augusta, APY TAFE, Complete Personnel and Bungala Aboriginal Corporation.

Janet Skewes who manages the TAFE program in the APY Lands described how “participants from Indulkana, Mimili, Fregon, Ernabella and Amata were involved in the 6 month program.  The program was delivered online using an electronic classroom by the Lecturer at Port Augusta and the students would hand in assignments by email.  At each location the community based Lecturer provided support and assistance with computing, literacy and numeracy.  All TAFE staff involved in this program have been delighted by the commitment shown by the participants and their keenness to commence work with OZ.”

The Prominent Hill Pre-Employment Training Program was developed with the objective of facilitating sustainable opportunities for surrounding communities. It was understood that without additional educational support it would be difficult for some of the more disadvantaged groups in the community to obtain or even apply for a job at the mine. Principally the program has focused on the long-term unemployed with a focus on people from the Upper Spencer Gulf and Far Northern region.

The Program enables local indigenous and non-indigenous people who have never worked in the mining industry an opportunity to gain an understanding of, and attainment of skills for a role in the industry. Graduates also obtain nationally accredited TAFE qualifications including Certificate 1, Resources and Infrastructure – Operations and Certificate 2, Metaliferous Mining and Operations – Open Cut.

The open cut at Prominent Hill copper-gold mine

OZ Minerals’ main asset is the Prominent Hill copper-gold mine in South Australia. OZ Minerals employs approximately 800 people and has an active exploration program with activities around Prominent Hill, Cambodia, Chile, Mexico and Cobar in NSW.