20+ RENEWABLE ENERGY PROJECTS WILL COMMENCE IN 2017 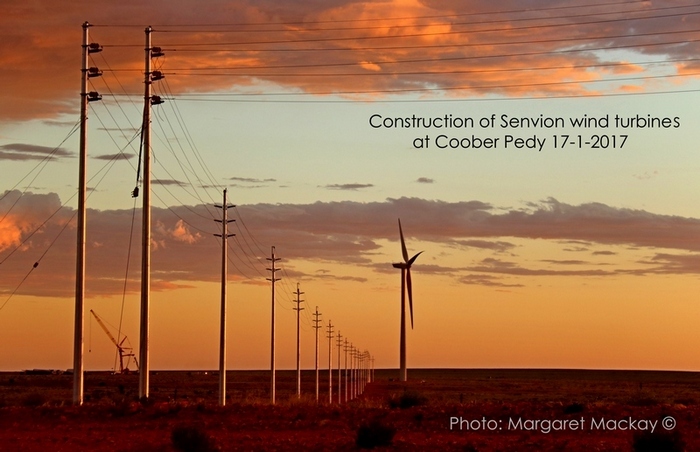 Coober Pedy’s $37m Wind Solar energy project is just one of more than 20 major renewable energy projects are already under construction or will start this year, delivering an unprecedented program of works which will create almost 3000 direct jobs and generate more than $5 billion of investment, according to new analysis from the Clean Energy Council released today.

Clean Energy Council Chief Executive Kane Thornton said more than 2250 MW of new large-scale renewable energy would be under construction in 2017, the most since the Snowy Hydro Scheme more than 50 years ago – one of the most iconic nation-building projects in Australian history.

“We are set for a huge 2017, with more than 20 projects either under construction or which have secured funding and will go to construction this year,” Mr Thornton said. “This investment is occurring due to the extraordinary cost reductions achieved in renewable energy, underpinned by the bipartisan support for the 2020 Renewable Energy Target (RET) as well as support from the Australian Renewable Energy Agency, the Clean Energy Finance Corporation and various initiatives of state and territory governments.

“Given the nature of renewable energy projects, regional parts of the country will benefit from many of these job opportunities, while the projects will provide flow-on benefits to the many different businesses involved. “This new wind and solar power will help our system cope during periods where everyone is using electricity. As we saw in New South Wales during the heatwaves a few days ago, every generator counts when the heat is on,” he said.

The figures show Queensland and New South Wales will benefit strongly this year from wind and large-scale solar, with projects also firing up in South Australia and Victoria. State and territory governments have been instrumental in bringing much of this investment forward and restoring confidence to the sector.

Mr Thornton said investors are flocking back to the renewable energy sector following several years of destabilisation under the Abbott Government.

“Investment confidence has rebounded and our economy is set to reap the benefits through a massive increase in activity between now and the end of the decade,” he said.

“Renewable energy is now the cheapest type of new energy generation that it is possible to build today, we have a strong program of works, and Australians are very much on board with the transition of our energy sector to one which is smarter and cleaner.

“However, clarity on long-term energy policy and support for renewable energy beyond 2020 will be essential to ensure these levels of investment are sustained.”

Projects with financial commitment – to start construction in 2017