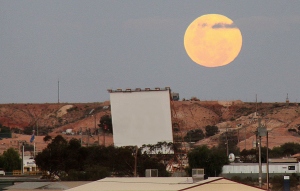 “Save the Coober Pedy Drive-In” has received $77,500 in funding from the State Government as a recipient of the Community Infrastructure Funding Program.

The Drive-In Theatre at Coober Pedy was built by the original Coober Pedy Miners and Progress Association and served as a major source of town funding that enabled many services to be performed in the town including road grading, rubbish collection and a fire service.   The Drive-In is currently one of two remaining outdoor theatres in the state and one of the only forms of regular family entertainment that the opal mining town has.

Last year saw the end of celluloid film movies, and threatened closure of the Drive-In unless the money could be raised to upgrade their equipment to digital.  Now with the State Government Community Infrastructure Funding, the digital upgrade will be made possible.

The Coober Pedy Drive-In is one of 104 projects that will be able to go ahead as the State Government, partnering with the Local Government Association fast treks the delivery of these projects.

Planning Minister John Rau said the Government has confirmed $7.5 million in funding for the projects and which would be matched with a dollar for dollar commitment by local councils.

“These are smaller scale community infrastructure projects and fast tracking their delivery will help stimulate local economies and benefit communities.  Over 600 additional jobs will be created through these stimulus projects”, he said.

The Chairperson of the Coober Pedy Drive-In committee, Steve Staines said, “This grant is a testament to the incredible commitment of the drive-in committee and the broader Coober Pedy community and the District Council of Coober Pedy. Our drive-in is saved! It is a great result for all Coober Pedians, past, present and future,” he said.

Commendation must also go to the Antakirinja Matu-Yankunytjatjara Aboriginal Corporation who committed $20,000 towards the project.

Drive-in Committee volunteer Sue Britt and others spent hours on many Saturday mornings over the past 8 months collecting empty bottles and cans from the community to raise nearly $4000 for the drive-in.

Sue said, “I’m really excited that the value of our drive-in has been recognised. A lot of volunteer effort and time has gone into the preservation of this unique community venue over many years.”

Projects approved for funding are from local government areas right around the state and include playground upgrades or new playgrounds, upgrades to bike and walking tracks and boat ramp upgrades.

“These are things local communities have identified as being a priority in their area,” Mr Rau said.

“These projects are all things that improve local residents experience in their community.”

“Bringing projects forward with State funding can make the difference for small businesses struggling as a result of the economy but it also delivers the upgraded facilities to the community earlier.”