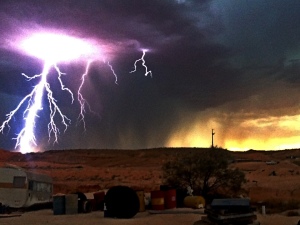 A narrow band of rain is currently producing some locally heavy rain over parts of Adelaide and the Mount Lofty Ranges and this is expected to continue for the next several hours and may lead to some localised flash flooding.

In addition, rain and thunderstorms are expected to become heavy over parts of the North West Pastoral and West Coast districts today, then gradually extend eastwards across the rest of the warning area during Friday. Local falls of 50-100 mm are likely and may lead to flash flooding. Damaging wind gusts over 90 km/h are also possible with thunderstorms in the north.

Locations which may be affected include parts of Adelaide, Ernabella, Oak Valley and Ceduna today, then Adelaide, Whyalla, Port Pirie, Clare, Maitland, Murray Bridge and Renmark on Friday.