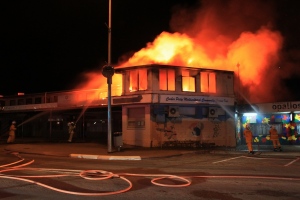 A fire that gutted an iconic building in the centre of Coober Pedy last night was attended by Coober Pedy CFS, Mine Rescue/SES, SA Ambulance volunteers and Coober Pedy Police.

Just before 7pm a smoke alarm was heard by members of a local group holding a meeting in an office below the blaze.

Individuals at the meeting said they were investigating the source of the alarm when a nearby shopkeeper raised the alarm around 7pm.

The group immediately evacuated the building and the CFS was called.

Fire Cause Investigators will travel to Coober Pedy this morning to assist local police to determine the cause of the fire.

Damage has been extensive to five premises including an opal store and a private residence.