By Ken Williams
Without so much as a rattling tappet or a noisy exhaust, the Global Green Challenge cars came silently into Coober Pedy looking for sun and not petrol on their way from Darwin to Adelaide. 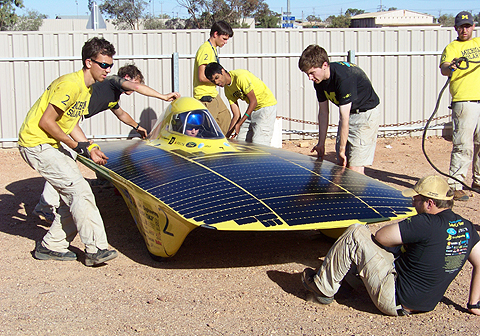 They slipped in so quietly that most of the locals didn’t hear them let alone see them.

The Opal Inn Hotel Car Park was cordoned off as a checkpoint for 3 days where teams could be timed, catch some rays on the solar panels, take a nature break then head off south to Adelaide. 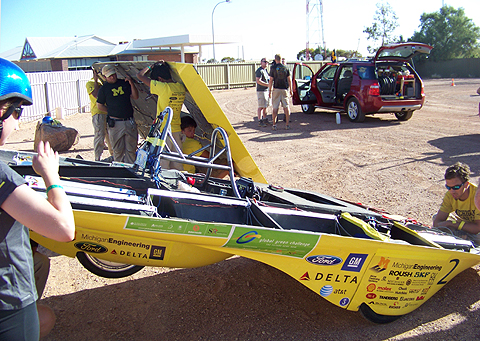 It was interesting to watch the precision of teams as they lifted the solar panel lids, angled them to the sun to gobble up the energy in their 30-minute pit stop. Photo: Ken Williams

Definitely not for the claustrophobic or any one bigger than a Melbourne Cup jockey, these whisper quiet; one-seater vehicles can reach speeds of up to 150kph covered in 6sq. mtrs. of solar panels and with a support crew larger than a V8 supercar.

With a sleek design, solar cells and a highly efficient in-wheel electric motor, the car was billed as the most competitive in Solar Car’s history able to travel 300 miles without sun.  It was interesting to watch the precision of teams as they lifted the solar panel lids, angled them to the sun to gobble up the energy in their 30-minute pit stop. 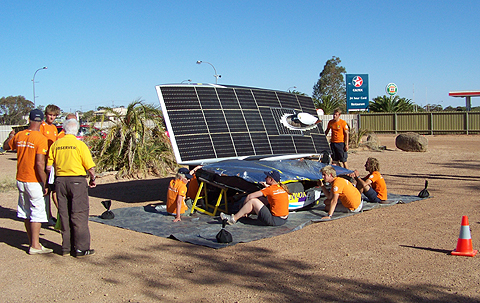 The Infinium crew, catching some rays on the solar panels at the Coober Pedy Opal Inn carpark during a checkpoint stop. Photo: Ken Williams

This was the first time the cars have actually had a scheduled stop in Coober Pedy and it seems it will be penciled in for future races.

Hopefully the organisers can give the residents of Coober Pedy a bit of notice next year and we can all get out and have a look at the future of transport and welcome these international guests to our town.

The race is usually run in late October so keep an eye and an ear out for next year. 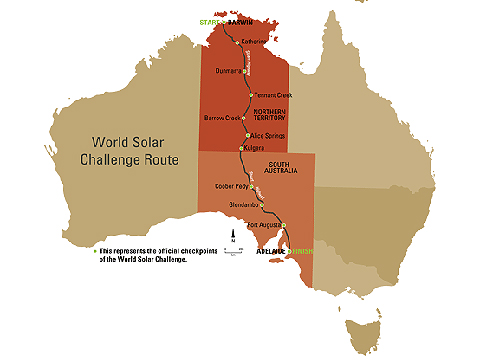