A 37 year old man from Adelaide has died after the 4WD he was driving rolled 7 times on a dirt road near the Prominent Hill mine site, about 150km south east of Coober Pedy in the state’s far north. 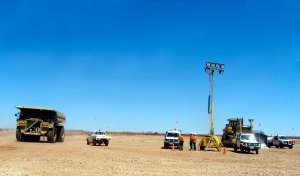 Prominent Hill - Light vehicles used at the mine site

The employee was on his second day back at work on the Prominent Hill mine site after returning from his honeymoon.

The collision occurred at about 8.00pm Wednesday 10th with Police and support services from Coober Pedy investigating and attending the crash. The deceased man who was driving a Fluor vehicle was the only occupant at the time of the crash and is the first death to occur at the Prominent Hill site.

The secondary dirt road was in a 60kph zone. The state’s road toll now stands at 63 compared to 82 at the same time last year.

“Yesterday evening an employee of a contracting firm engaged by OZ Minerals at its Prominent Hill site in South Australia was tragically killed in a single light vehicle accident approximately 35km from the Prominent Hill Mine site.

The employee was a construction supervisor on the development of the borefield supplying water for the processing facilities, located 45km from the mine.

As a sign of respect all activities on site have been shut down for half a day and OZ Minerals’ Senior Management are on site to brief staff and conduct further accident investigations.  The company’s thoughts and deepest sympathies goes out to the employee’s family and co-workers at this very difficult time”.