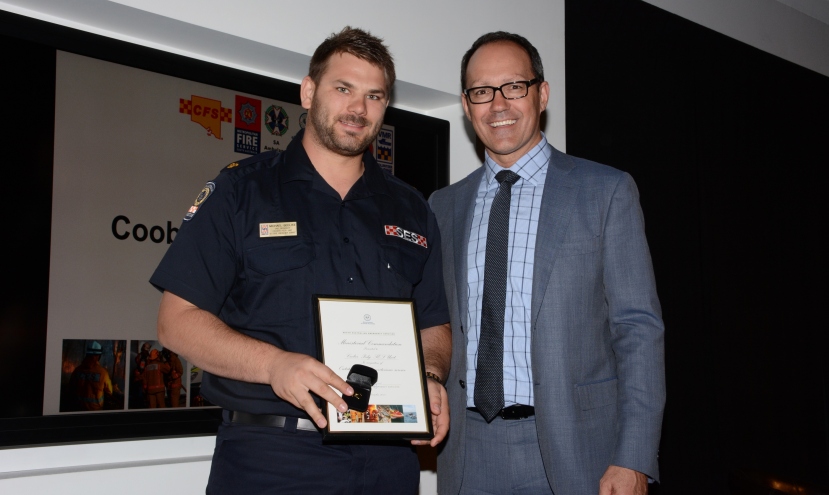 A Nomination that was submitted by the SES Deputy Chief Officer, Dermot Barry on behalf of the Coober Pedy Mine Rescue/SES received a Ministerial commendation at a ceremony on 19 November 2018.

Unit Manager of the Coober Pedy Mine Rescue/SES Michael Beelitz accepted the award from Minister for Police, Emergency and Correctional Services Corey Wingard MP that read, “For Outstanding and Meritorious Service”

The Nomination: The year ending 30 June 2018 was a busy year for the unit on many fronts, due to its outback location and responses varying from Road Crash Rescue, storm support, vehicle assistance and confined space (being Mine Rescue).

The Coober Pedy Unit has both increased its visibility and recruited 7 new members over the last year which, due to location and the difficulty recruiting in regional areas, is exceptional. As a consequence, a full crew has been available for each response and the Unit hopes to be able to form even larger and more varied crews.

For an outback unit, training has increased, skills enhanced, and members are keen to support their community in the best way they can.

And of course, the unit is skilled in Mine Rescue (which in their case incorporates Vertical Rescue and Confined Spaces skills), and in setting up the airstrip for emergencies. Unique and skilled roles,

Roles the Unit has been active in; In recent years, especially when the Mine Rescue/SES assisted police with the search for the remains of missing teenager Karen Williams who was last seen alive in August 1990. The Unit volunteers assisted in November 2013 with temperatures of 40 degrees plus, and again in September 2014 after police received fresh information. Both searches involved many volunteers over several days.

The renewed search in November 2013 saw our Mine Rescue SES volunteers liaise with the local council to enable them to have the use of Council’s heavy equipment in the search, as over time opal field diggings had altered, with new mines added and old ones filled in.

In November 2013 police charged Nicola Novakovich with her murder, having last been seen in his vehicle. Karen was allegedly raped and murdered with her body then thrown down a disused mine shaft. Novakovich was found not guilty of murdering Karen in August 2016; whilst the judge was satisfied that he and an associate “had some involvement in the death of Karen Williams and the disposal of her body’, but took issue with the evidence. The case still remains open.

Besides its core role, Coober Pedy Unit has also increased its visibility and presence within its local community through participating in events such as the Breakaway Marathon and Opal Festival.

Additionally, the Unit had several training courses delivered in the region so that volunteer members can continue to support their community in the best way they can by maintaining or enhancing their skills levels.

Coober Pedy SES volunteers also assist Emergency Aircraft that need to land on the Traeger Road Airstrip in between Coober Pedy and Glendambo. SES store and manage the emergency lighting for this strip to allow Emergency Aircraft to land at night on the main highway. Setting-up these airstrips is a complex operation and must comply with very strict standards to meet CASA and Department of Planning, Transport and Infrastructure requirements. Again, our volunteers just see it as another way to support their local community.

During the year, the Unit continued to develop its new mine rescue specific truck by refining the storage for equipment and updating both required tools and the equipment.

The Unit also increased its membership by 7. The effort by members with the vehicle has proven worthwhile with a mine rescue earlier in the year and then more recently in June 2018, when a man plunged down a 15metre mine shaft. Two people had been scouring for opal when one slipped and fell down the vertical mineshaft late at night. The rescue operation took just under two hours.

Unit Manager of the Coober Pedy Mine Rescue/SES Michael Beelitz said, “This is a fantastic honor as a unit; as the current Unit Manager it makes me incredibly proud to play a small role in the continuation of such a strong unit.“

“The unit has a strong and rich history due to the hard work of past, and current members. This strong history, and hard work, has placed us in a strong position to be able to serve the community,” said Michael.

“We, as a Mine Rescue/SES Unit, currently have a solid membership base with diverse backgrounds, professions and a broad range of life skills. We have a number of new members at the moment who are building their own unique skills and capabilities within the unit; no contribution is too small or insignificant,” he said.

“While this award recognises the dedication and contribution of the unit; it would not be possible without the current support of the State Emergency Service. The training, member support and assets provided to achieve each and every rescue is second to none”

“I look forward to being involved, and supporting, the unit as it continues to evolve and would encourage any one who has ever thought about volunteering to come down and be involved,” said Michael

“There are both operational and non-operational volunteering options available. Everyone has something to contribute, no matter how small you think it may be. Please call 0407 724 966, 1300 364 587 or email sesrecruitment@sa.gov.au to register your interest,” Michael concluded.