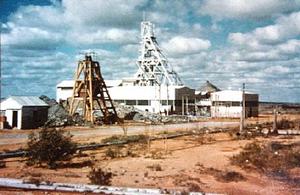 On March 19, 2015, Governor Hieu Van Le issued Letters Patent to command Rear Admiral Kevin Scarce to ‘investigate’ the potential of the Nuclear Fuel Cycle in South Australia. Shortly after stepping down as Governor, Kevin Scarce queried: ‘Why we haven’t looked at the nuclear option much more systematically I will never understand’. (The Australian December 13, 2014)

This statement was made less than two weeks after the Foreign Minister Julie Bishop commented that it was an ‘obvious conclusion’ to consider nuclear to reduce carbon emissions. In this we see that the issue South Australians are currently facing in the low level waste site selection process has always been a state and federal alliance, no mere coincidence of need.

Beginning this process with a Commissioner predisposed to a nuclear future lends ammunition immediately to groups and individuals crying foul play, diluting any case that the Commission could ever be regarded as independent.

The Commission has been criticized widely as being a political stunt, not an independent Commission but rather a rubber stamp. The findings of the Commission released in May 2016 tends to support this view. The report itself presents evidence against its own findings. We are reminded that the Radium Hill mine and Port Pirie treatment plant remain as unresolved radioactive sites. The Commission finds:

‘The failure to consider the environment in the planning, operating and decommissioning of these facilities has resulted in ongoing management challenges….Although subsequent assessments of both sites show they do not pose a serious radiological risk to the health of visitors to the sites the state government is required to continue to monitor and manage potential environmental contamination’  (Nuclear Fuel Cycle Royal Commission Findings May 2016)

Why then, the public may ask, would a Commission which acknowledges the failure of government to manage the legacy of the nuclear fuel cycle suggest the state has the capability of managing the world’s nuclear waste?

In Australian Atomic Confessions (Kathy Aigner 2005) and Silent Storm (Film Australia) we learn that this very ‘industry’ conducted human guinea pig experiments upon the Australian population during the 1950s and 60s Marshall Island, Emu Field and Maralinga Nuclear tests. The toxic legacy of the nuclear weaponry and fuel cycle upon indigenous and general populations was apparently deemed not worthy of discussion in the report. Yet these documentaries and many more reveal horrific and inhumane attitudes of the governments and corporations peddling their nuclear products.

Again, when thorough, horrific documentation reveals an ‘industry’ that treats people like lab rats, why would any sane person place trust in any aspect of the ‘industry’ or any proponents of it?

So why, you may ask, would a government go to so much effort and expense to produce such a rubber stamp report?

A glance at the unique South Australian Royal Commission Act 1917 may reveal some clues as to why the government has chosen the mechanism of a Royal Commission to lead the way for such risk inherent proposals.

The Act appears to be a black hole into which any further government responsibility conveniently disappears. A Law Reform Commission submission points to the inclusion of ‘privative clauses’, arguably unconstitutional but not High Court tested. The key result is that no comeback exists to challenge the Commission findings, creating what could be viewed as a negligence free zone in which such hasty and experimental decisions can be made.

The reader may not have the inclination to read this antique piece of legislation so I will reveal the controversial clauses which make Royal Commissions in South Australia such a clever tool of government when any sensitive issues arise.

Section 7 – Commission not to be bound by rules as to procedure or evidence.

The Australian Law Reform Commission (May 19, 2009) commenting on the inclusion of privative clauses in legislation notes: ‘Judicial review cannot be excluded under the Commonwealth Constitution, and the usefulness of conventional privative clauses in limiting the scope for review of decisions under Commonwealth legislation now appears to be debatable at best. Therefore it is unclear what use a privative clause, such as that included in the Royal Commission Act 1917 (SA), would serve, other than to further confuse matters and to encourage arid jurisdictional debate.’

In 2013 the Attorney General Mr Rau warned a parliamentary committee to back off from pursuing the findings of the Debelle Royal Commission into school sexual abuse cases in the SA education system. Rau denied he was trying to silence the enquiry with the powers in the Act stating: “I’m just letting them know. I don’t know where they want to go, I’m not involved in the enquiry”. (SA Attorney-General warns of legal risk of pursuing Debelle Royal Commission issues at parliamentary inquiry – ABC September 30, 2013)

Therefore, within the mechanism of a Royal Commission in South Australia, lies a very clever means to launder and process political skullduggery, neatly and apparently according to the untested Act, legally.

The Citizens’ Jury, the invention of newDemocracy foundation is in continuance of this theme as is the Nu-Clear Public Relations campaign designed to normalize the public to the findings of the Commission and the ‘which colour nuclear’ options embedded in the scheme. The campaign suggests that the results of the independent Commission are clear, now it’s time for the public to become clear and then the government can proceed.

What remains unclarified by this advertising is the implicit government denial of any responsibility for the hazards and risks obviously associated with such an undertaking.

This is apparent within the Premier’s own press statement following the release of the report and apparent in the assumptive approach of the Nu-Clear campaign underway.

‘No international partner will want to be part of entering what is a long term and extraordinary set of investments if they don’t think the community is going to be able to deliver on them. And so the community needs to accept this’ (SA Nuclear dump debate to go before citizens’ juries, ABC, May 10, 2016)

A chilling approach to community engagement but exactly the program now underway and being funded by taxpayers who apparently don’t have a say but rather ‘need to accept this’.

Following the Public Relations bouncing ball further we return to the federal situation and what I would describe as the unlikely Flinders Ranges Bandioota site setup. A retired sitting member has volunteered his property for a low level nuclear waste repository. Aside from the alarm bells of conflicting interest what else could such a well timed controversy serve?

In sales it’s termed the ‘alternative close’, distracting the public eye away from the target and onto a disposable false flag. Logic would have it that both high level and low level waste would occupy the same site, however logic is also disposable in the rough and tumble of politics and public persuasion.

Of course Roxby Downs would be a more logical location, and meanwhile the parameters of debate have been controlled and narrowed down to fit the governments actual agenda.

The Flinders Ranges is therefore a red herring designed to provide a cheap win satisfying the superficial expectation of democracy in a state arguably devoid of it. Based on the complete set of evidence not available in the Commissions final report, the case for no nuclear waste dumping in Australia should be maintained. A location debate is what the government seeks via what could be described as the Flinders distraction.

And yet the issue is perhaps larger than the government realizes and South Australians have seen the consequence of state mismanagement. The ‘SA for Sale’ approach to government which has become very stale and wasteful of the creative and clean opportunities already present but underinvested, while this state remains a hand maiden to international business exploiting the weak present political landscape.

As the saying goes history repeats itself at least until the lessons are learned. South  Australia’s foundation was based on an exclusive and clumsy land grab, managed by the very first Commission – the South Australian Board of Commissioners. The eccentric architect of South Australia Edward Gibbon Wakefield answering to the House of Commons Select Committee enquiring into the bankruptcy of South Australia in 1841, described this Commission as ‘a dilettante commission, an amateur commission, a sort of fancy commission’.

Perhaps the same can now be said of the Nuclear Royal Commission, the object of so much concern and controversy today.