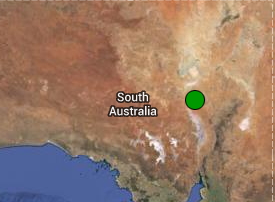 A magnitude 5.0 earthquake was recorded southwest of Maree in South Australia’s Far North at 11:58am on Wednesday morning 4 June 2014.

David Love, Seismologist with the Geological Survey of South Australia within the Department for Manufacturing, Innovation, Trade, Resources and Energy, said this was a significantly large earthquake however, given the remote location no damage had been reported.

“Earthquakes of this magnitude can be felt over 150 kilometres away,” Mr Love said.

“It happened within a band of earthquakes from Leigh Creek to Oodnadatta, and is the largest in the region since November 1994.”

If you felt the earthquake, you can report it at http://www.ga.gov.au/earthquakes Information on South Australian earthquakes can be found at