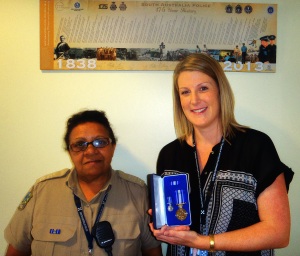 After the presentations, Assistant Commissioner Smith emphasised to other members present, the medal is recognition for sustained, diligent and ethical service in police. He congratulated and thanked the recipients for their commitment to the community and policing.

Senior Community Constable Scott said, “She enjoys the camaraderie with her fellow police members and receives a personal sense of satisfaction assisting the community.”

After two decades, Jenny has witnessed the development of both policing and community services to assist victims, particularly for the women looking to escape domestic violence and values the availability of the improved services.

Most of all, Jenny appreciates the support and encouragement from her family during her time with South Australia Police.

Lauren Leverington’s ten year career includes service in Adelaide as a patrol officer and detective. The Sex Crimes Investigation Branch enjoyed the comprehensive skills of Sergeant Leverington before her move to Ceduna with her Detective husband, Justin.

During her time in Ceduna, Lauren attained the rank of Sergeant to lead her team of general patrol officers.

Recently, Lauren and Justin featured in an article of the Police Journal, published by the Police Association of South Australia, about spouses working in the same policing environments.

This concludes the first week of service to Ceduna by Constables Elesha Buck and Matthew Sims. Both members transferred to the West Coast after general duties service in the Elizabeth Local Service Area. Elesha and Matthew wanted to experience country policing after hearing positive stories from colleagues who have served the remote localities of South Australia.