In a letter to Minister Gail Gago, the  Chairman of the Andamooka Progress and Opal Miners Association, Peter Allen states: “When the Outback Communities (Administration and Management) Act 2009 was first introduced, Andamooka lent full support to it’s passage through Parliament.

We offered this support because we fully believed in the Act’s value and the benefits it could offer to outback communities. Further more we trusted the content to be accurate and genuine.

The selection of the new Authority members has shown our trust to have been totally misplaced.

Mr Allen stated in his letter, “Your publication states that “at least four of the members must be from different outback communities” and this created an expectation in the outback that at least 4 of the new members would reside in outback communities.

The reality however is very different. Only one of the new members could be genuinely accepted as coming from an outback community and in fact there are no members appointed from anywhere West of the Flinders Ranges who in our opinion would qualify.

Discussions with other outback communities lead us to the conclusion that we are not alone in our concerns.

With this in mind my Committee (APOMA) have instructed me to advise your office that we will not recognise your new Authority nor will we be managed by an unrepresentative Board with no real knowledge of, or ties to the outback”, Peter Allen wrote.

Mr. Allen further stated in an interview: “It seems that one member who was appointed by the minister does lives on a station within an unincorporated area, however her nearest community is a council area and  therefore she is not specicifcally associated with any outback community.

Another member also appointed by the minister has recently moved to the outback from the eastern states with no personal knowledge of this region.  Another appointee is now living in Adelaide after leaving the outback over four years ago.

The community feeling is that these surprising appointments remove objectivity and the ability or the desire to advocate for outback communities. This gives the appearance of a very compliant government authority.

Outback residents living in remote areas now feel that there has been a breach of trust of the people of this state which is clearly not representing the people it pertains to”. 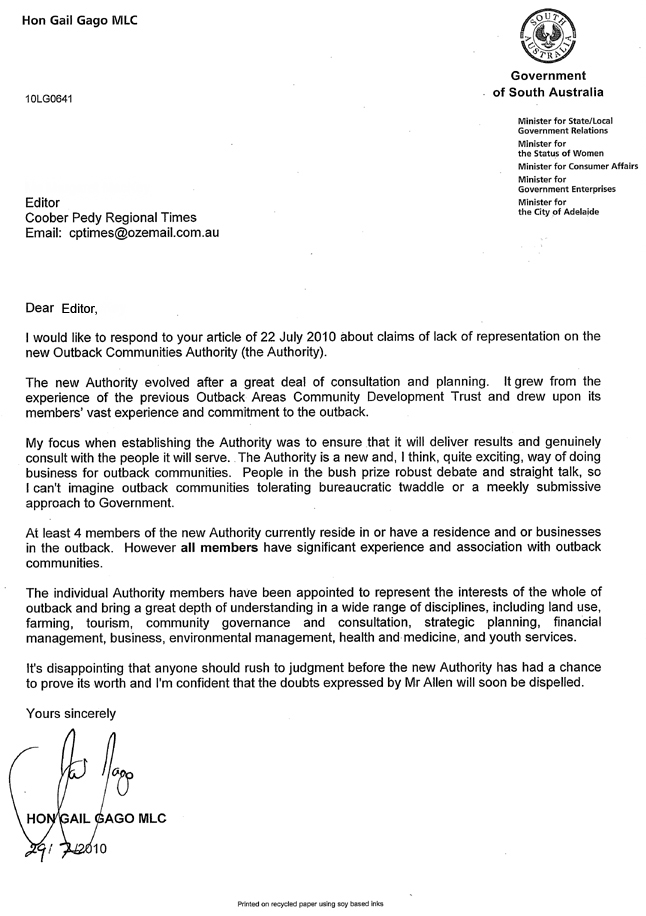 Thank you for arranging a meeting between my committee and Mick Petrovski which concluded a few hours ago.

While much of the discussion was useful it is unfortunate that we ultimately had to agree to disagree over the “at least four of the new authority members will come from outback communities” section of the act.

It is still our view that this requirement has not been fairly met nor the selections particularly well thought out. It is also interesting to note that at least six other communities have expressed the same concerns thus far and it is further likely more will also follow. With this in mind it seems logical that many people from the outback believe, whether by design or accident, they have been misled.

This represents a most unfortunate start to the new Authority where trust must play a paramount part in moving forward.

As a result my committee instructs me to advise you as Minister that our previously stated position remains unchanged.

It is our wish to see this matter resolved, not only for Andamooka but for every member of outback communities in the unincorporated region of the State. We believe a resolution is only possible if OCA appointments are made within the terms of reference of the act, as perceived by community members.

There is however one upside to this situation in that it has galvanised the townspeople of Andamooka and our membership numbers have escalated remarkably.

I am writing as an individual to express my support for the Andamooka Community.

I also note that correspondence from myself ( as Public Officer) to your office and from the old OACDT has not been responded.

A response was received from the Attorney General but this response did not address the questions/issues that I raised.

Minister Gago, the OACDT acted with mischief in this community and has disrupted the business of the towns management. That the management of the OACDT were unable to answer letters or return phone calls does nothing to allay these concerns.

While there is a need of course for Outback residents to be allocated funding and services, there is no need for the government to interfere in the Internal Management of Associations.

It may be better to look at ways of providing services which are not so damaging. The OACDT apparently did not earn the respect of Outback Communities, so I doubt such respect will be achieved with a name change.

APOMA SAYS: “THE DUCK WE AGREED TO DOESN’T QUACK”

In response to Ms Gago’s letter to the Editor Coober Pedy Times dated 29 July 2010, it would appear that Ms Gago has added a qualifying option to justify her selection of members to permit appointment to the Outback Communities Authority even though they do not live in an outback community.

I bring your attention to Ms Gago’s quote “..currently reside in or have a residence and or business in the outback”.

I can find no mention in the Outback Communities (Administration and Management) Act 2009-1-7-2010 that qualifies selection to the new Authority by nature of property or business ownership. In fact the Act clearly states “members of different outback communities”.

The new Authority requires the support of all members of the outback affected by its decision making and it is unclear how this trust and support  can be acquired by a Board of primarily city dwellers.

The Authority should represent the interests of the whole of the outback and we cannot see how this is possible if the Authority does not include residents of outback communities as specified by the ACT.

The communities expectation of any piece of legislation must be mirrored by the actions of government in their use of that legislation.
ie. If government promises a duck we need to see it looking, quacking and behaving like a duck.

As a matter of interest, a community is described as a group of people which may well render individual pastoralists ineligible to represent outback communities on the new Authority.

We trust that Ms Gago will address this matter with a sense of urgency to ensure that the selection of OCA members complies with the ACT.