Welting thunderstorms served a double dose of torrential rains on towns in the far north east of the state including Roxby Downs, Andamooka, the Flinders Ranges and far north east pastoral, severely damaging roads and flooding properties in the region.

Approximately 85 mm was recorded at the Olympic Dam mine and up to 150mm at Roxby Downs pastoral lease.

Minor flooding has occurred around the mine resulting in underground activities being temporarily suspended but work is expected to resume by the end of today. Activities on the surface have not been affected.

Safety checks are being undertaken on all equipment and no injuries have been recorded.  BHP Billiton is continuing to monitor the situation.

The Olympic Dam airport has not been affected and services are being conducted as normal. Some flooding has occurred in Roxby Downs with a small number of houses affected.

Significant flooding has occurred at Andamooka with major damage to local roads and the main road into the town closed.

Local resident Carl Christensen, Andamooka Opal Miner told regional radio in the morning it was the most rain he’d experienced since 1975.

Coober Pedy, Mintabie and Marla  in the extreme far north were on the fringe of the storm as it passed by threatening, but with no damage.  A small amount of rain was reported.

Floods in the Flinders Ranges below shows Arkaroola road near the rail crossing looking north towards Copley East  shows the extent of the massive flooding in the area. 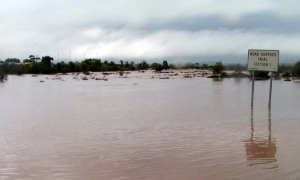 Andamooka situated on a creek saw water gushing through the town

A surface trough and upper level disturbance moving over the Northeast Pastoral on Thursday and Friday is likely to produce falls in the range of 30-50 mm over the Cooper Creek System.

DIAMANTINA-WARBURTON SYSTEM
At Birdsville the Diamantina Creek is at the minor flood level.  Flood waters continue to flow along the South Australian section of the Diamantina/Warburton Creek and levels are rising in the lower reaches of the creek.  Low flows are reported into Lake Eyre.  Floodwaters from Queensland are anticipated to flow into the lake in approximately a week.

Travellers to the region are reminded to take care at all creek crossings and to seek information on road and track conditions from the Department for Transport, Energy and Infrastructure at
http://www.transport.sa.gov.au/quicklinks/northern_roads/northern.asp.

Thunderstorms are no longer affecting the Northeast Pastoral district. Further thunderstorms may develop this afternoon, but are not expected to be severe.

Severe thunderstorms resulted in gaugings to 9 am of 124 mm at Roxby Downs Station, 86 mm at Olympic Dam, 85 mm at Andamooka and 67 mm at Leigh Creek, including 43 mm in one hour, this morning resulting in flash flooding.

The State Emergency Service advises that people should:
* Not drive, ride or walk through flood water.
* Keep clear of creeks and watercourses.

Information on flooded rivers from the Bureau of Meteorology