UN SUBMISSION – ABORIGINAL PEOPLE BECOMING REFUGEES ON THEIR OWN LAND 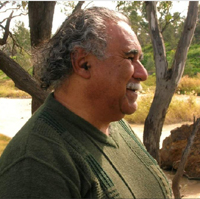 Australia gets bad rap to UN rapporteur over Aborigines

Canberra, 17 August 09 –  A northwest NSW Aboriginal leader has put a submission to a visiting high United Nations official on indigenous rights, alleging that Australian governments are trying to wipe out Aboriginal identity.

Michael Anderson, leader of the Euahlayi Nation of northwest NSW and southwest Queensland and elected spokesman of the 16 tribes in the Gumilaroi nation had a meeting scheduled in Canberra today with Professor James Anaya, UN Special Rapporteur on the situation of human rights and freedoms of Indigenous Peoples.

Mr Anderson, the last surviving 1972 founder of the Aboriginal Embassy on the lawns of Old Parliament House in Canberra spent many years lobbying for the Aboriginal cause at the United Nations in Geneva and New York; he is familiar with how that machinery works.

He will visit a number of town camps and Aboriginal communities across the Northern Territory and other parts of Australia.

He is expected to meet with a number of groups to raise concerns about the federal government’s Northern Territory intervention, as well as the government itself, before reporting back to the UN.

More than 3,000 letters from Indigenous people and community groups will be presented to Professor Anaya, detailing concerns the intervention is racially discriminatory.

Below is Michael Anderson’s submission:

If we truly seek to understand the cultural, socio-economic and political status of Aboriginal Peoples in Australia we need only to revisit a decision made two years after the 1967 Referendum.

During the Cabinet’s deliberation they acknowledged the absoluteness of the public’s expectation for the Commonwealth Government to deal with Aboriginal issues overwhelmed all the powers that be.’

The overwhelming success of the 1967 Referendum shocked the then Prime Minister, Harold Holt, and his Cabinet.  In a confidential Cabinet Minute dated ‘Sydney 2nd July 1968 Decision 314’, the Cabinet referred to its first objective which Aboriginal policy serves. The conclusion was:

It has to be understood by observers of Aboriginal politics in Australia that all governments’ primary objectives on the surface is to deal with the bricks and mortar issues while beneath the covers social engineering is going on.

The recent ‘Closing of the Gap’ initiative is designed to win the hearts and minds of the Australian public whilst assimilation proceeds. The law and order issues and child molestation have been revved up and can be likened to the emotive submissions of George Bush and his reasons for attacking Iraq. There were other means available to the Australian Government to deal with any form of child neglect or abuse anywhere in Australia.

To develop an emotive campaign using children as an excuse to invade Aboriginal communities by way of martial law is an absolute abuse of parliamentary powers and privileges.

This abuse is demonstrated by the fact that all civil liberties of Aboriginal people in the Northern Territory have been expunged, which means that they have no right to challenge anything that is being proposed or done to them under this “Intervention” program.

It is not surprising that the Australian and Northern Territory Governments fail to show any statistics for child sexual abuse or other abuse over the last two years.

It is also extremely concerning to realise that priority expenditure for building houses in the prescribed areas under the Intervention are those that will house the administrators of the Intervention –e.g.  the General Business Managers and the Police. With this being the case is this an indicator that represents the fact that they are there for the long haul.

This Rudd Labor Government is not at all honest in their dealings with Aboriginal Affairs especially when one considers that they have established a policy after being elected to resume Aboriginal title to land under a strategy that requires the Aboriginal people to sign forty to ninety year leases over to the Federal government in return they are to receive infrastructure development and housing. This would not be tolerated in any other section of the Australian community nor, however, in any other section of the civilized world.

This policy is not restricted to the Northern Territory but is itself a national program.

Michael Anderson: "Australia is a colonial country that has mastered the art of deceiving the eye"

This then begs other questions. Why has the government in the past twenty years usurped and disposed of the millions of dollars of assets that have been acquired through Aboriginal initiatives? Why has the government failed and continues to fail to train Aboriginal people to understand Western economics, in order for the people to take full advantage of their wealth to improve the situation of their own People?

By taking all of these assets away the governments of the last twenty years have forced Aboriginal Peoples into welfare dependency and now seek to find solutions for problems their policies have created.

The current status of Aboriginal people is that we are refugees in a Country we once called our own. Past and present policies continue to deny our right to be within our homelands on our own terms.

The Australian Government refuses to accept that all policies, past and present, maintain this status amongst our Peoples. The invader state has legal and international obligations to rectify the situation of refugees. The policies of family resettlements of the 1970s in New South Wales and the current twenty hub-centres proposal in the Northern Territory have been purposefully designed to break up Peoples’ connections to their homelands, thereby exacerbating the cultural, economic and social problems associated with being refugees.

This initiative by the government to establish these hub-centres removes people from their cultural homelands. This in turn will disconnect the young ones from their heritage and in Aboriginal Australia ‘Country’ is the central feature that provides a person with identity, self-worth, family and community. To have people clustered in hub-centres denies the Old People the right to do ceremony with their children on their own Country.  The hub-centre policies and objectives are a covert operation by the government to eradicate cultural connection to Country, as the Old People cannot teach their young whilst being separated from their Country.

The dollars that are being offered for cultural maintenance and language programs do not include returning to Country for ceremony but rather promoting popular tourist type song and dance routines and the sale of artwork. We are being forced into a corner of being a relic of the past and a museum piece.

On the issue of Land Rights we need only to mention that any lands that are currently in our possession are worthless in terms of Western real estate values, if we are to talk about the economic world. All land that is ‘owned’ by Aboriginal people is classified is Aboriginal Land which, in economic terms, has no value. All Aboriginal ‘owned’ land is in some form or another ultimately controlled and owned by a white government minister, through the various clauses that are written into the Acts themselves. In other words, all government ministers, who deal with Aboriginal affairs, have powers of resumption at any time with and can be done without any form of compensation and without the consent of Aboriginal traditional stakeholders.

The Indigenous Land Corporation (ILC) is failing to provide for Aboriginal people as per its purpose and function. Originally the ILC was a compromise by the Federal government as a peace offering, which would provide a mechanism through which Aboriginal nations and Peoples could acquire land, for cultural or economic purposes, if they could not be successful in Native Title claims under the Native Title Act 1993 as amended.

The Indigenous Business Australia (IBA) is not an organization designed to deal with small businesses. Instead it deals with macro industry, which very few Aboriginal nations or communities have the capacity to establish. In the main, Aboriginal nations are part of the micro economic industries, which cater for community needs and services only. It is understood by many Aboriginal people that to be successful with an application to the IBA one needs an active non-Aboriginal partner in business, without which your application will be unsuccessful.

In respect to the issue of sovereignty, the one piece of correspondence that haunts Aboriginal people is a 1980 briefing from the Attorney-general’s office to the Prime Minister. In fact, in the same document on the issue of nationhood of Aboriginal Peoples, Minister Baume expressed concern that, if the government were not diligent and serious enough about the Treaty negotiations, they were facing a potential disaster. He wrote:

He went on to cite a United States court case The Cherokee Nation v The State of Georgia (1831). Using this case, Minister Baume continued:

“It may be that, the development of the NAC – albeit a development based on Australian law – an Australian Aboriginal ‘community’ is developing and will develop to the point where, if the United States models are followed, it might conceivably become appropriate to speak of an arrangement of that organised community and the Commonwealth as a ‘treaty’.

However, the Attorney-General recently advised the Prime Minister in a letter dated 15 July 1980,   that having regard to the connotations of the word ‘treaty’ in international context, it would be very desirable to avoid the word ‘treaty’ in relation to the agreement, and that instead a term such as ‘Makarrata’ might be used if, upon full examination, it was found appropriate.

He went on to say that it would be possible to include in the arrangement as if they were a community separate from the Australian community, and provisions to ensure that the arrangement was not conceived as being analogous to a treaty between separate nation States.’

In considering whether such provisions should be included account should be taken of any risk that, in the absence of sufficiently explicit provisions to the contrary, a claim might be made that the agreement accorded a status on which Aboriginals could base a right of ‘Self-determination’ as a ‘people’.”

At the end of this quote the Minister cited in brackets an example when he referred to the United States (sic) Charter, Article 1, and the Declaration on the Granting of Independence to Colonial Countries and Peoples.

In concluding this point Minister Baume said in clause 8:

“I note that the resolution by the NAC requests a treaty of commitment between the Australian government and the ‘Aboriginal nation’. For the reasons mentioned above the use of that word should be avoided by the ‘Commonwealth.’   [added emphasis]

If we are to follow the history of Australia’s dealings with international law on the question of human rights and Aboriginal rights and freedoms will we find a trail of deceit and deception.

Australia is a colonial country that has mastered the art of deceiving the eye. The words and actions of government appear on the surface to be honourable but scratch the surface and you will see institutional racism personified.

This is the case currently with regards to the UN Declaration on the Rights of Indigenous Peoples.

This government has paid much lip service while in reality defaces it through their domestic actions, eg the Northern Territory Intervention and the Native Title Act.

That the UN Special Rapporteur investigate all Acts of the Australian Federal Parliament that deal with and impact upon Aboriginal Peoples and report all violations within to the CERD, CESCR and any other UN treaty body whose articles are violated.