The Governor-General Her Excellency Ms Quentin Bryce on the tarmac at  Coober Pedy, after a two day visit to the Opal Capital

Wistfully looking back upon a century of pioneering and her  Coober Pedy hosts, the Governor General, Ms Quentin Bryce says farewell to the Opal Capital, with perhaps a secret thought to come back one day as a noodler or even a volunteer with the CFS. 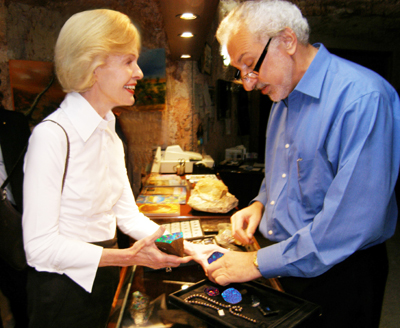 Their Excellencies  were taken on  a  visual   journey at Umoona Opal Mine and Museum which  included the creation of opal through “time”, the first opal discoveries, the evolution of the opal industry and Coober Pedy from the early 1900’s until today. Produced and hosted by Mr. Yanni Athanasiadis.

The Governor General and her entourage then visited the well known Umoona Aged Care facility, meeting with traditional elders from the wider region. The special occasion was  hosted by Mr. Ian Crombie of the Antakarinja people and Umoona Aged Care Manager, Sonia Mazzone and staff.

The Governor General  and Mr Bryce were greeted by a “Welcome to Country” traditional dance, portraying the journey of the Seven Sisters.

“The Seven Sisters,”  is the story of Creation.  It tells of a journey that began in the desert to the west of the continent and extends through several different language areas to the central desert, continuing  on through  Pitjantjatjara country and then further north.

This is  an important story; deeply ‘religious’ and culturally significant  to the  many Anangu tribes whose traditional homelands  occupy the continent.

The Governor General expressed her appreciation of the  privilege afforded her by the special welcome.  Afternoon tea of damper with berry jam and cream was served to the guests while Her Excellency, Mrs Bryce spoke with the individual Elders and guests.

The official tour then progressed to the Umoona Aboriginal Community also in Coober Pedy.

At the Civic Reception on Wednesday evening, hosted by the Mayor of Coober Pedy, Councillor Steve Baines, her Excellency Mrs. Bryce in her address  stated, “Coober Pedy is indeed the most famous town in Australia. It  is full of romance, nostalgia and a wonderful reminder of the true Aussie spirit.” 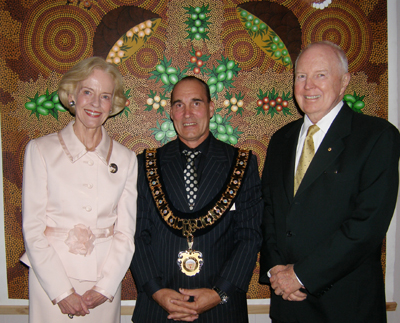 Mrs. Bryce praised the spirit of volunteering in the town and expressed her excitement in visiting the venues on her itinerary, meeting all of the special people who make up this unique, multicultural community in one of the remotest parts of this country”. Thursday morning’s schedule included a visit to the Tjitji Tjapu Tjuta Child Care Centre and also the Coober Pedy Area School.

A highlight of the Governor General’s trip was a tour of the well known Breakaway’s Scenic Reserve,  a striking rocky outcrop of flat-topped mesas. The  area known as The Breakaways was once covered by The Great Inland Sea.  It  is now preserved as a natural ecological site which is home to  an array of native fauna and flora.

Her Excellency who is a strong advocate of volunteers in many fields, supported  local endeavors  for a volunteer drive promotion, to aid in attracting volunteers for the heavily stressed Country Fire Service in South Australia.  Mrs Bryce agreed to be the inspiration and mascot for the Coober Pedy CFS  as  pictured below at the Breakaways Scenic Reserve complete with fire truck. 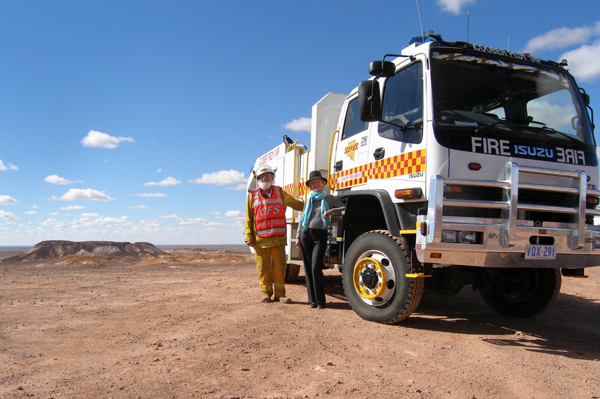 Mr. Royce Cooper of Coober Pedy South Australia and Her Excellency The Governor General of Australia, Mrs Quentin Bryce in a joint appeal for volunteers to enlist at the Coober Pedy CFS

Local Coober Pedy resident and volunteer fireman Royce Cooper who instigated the photo shoot at the Breakaways Scenic Reserve said, “volunteers are always needed in remote areas.  It’s a wonderful feeling to be able to train with mates, assist in an emergency and to make sure that our neighbours are safe.  Someone must do this worthwhile work which has plenty of rewarding moments.”

The Breakaways tour was the last event for the Governor General, then time to bid farewell to the Opal Capital, with it’s colourful stones, colourful history, colourful characters and it’s unfolding evolution of events including the near recent mining boom which threatened the  existence of the opal fields as competition for land, water  and workers took a small toll.  “Tomorrow” a new competition is likely to emerge, keeping the colourful town in the spotlight once again.

Mayor Steve Baines and his wife Sharon Baines accompanied the Governor General, Mrs Bryce and her husband Mr. Michael Bryce to the local airport for their departure.  It seems that friendships were made  in just a few days and Mr Bryce in particular received answers to many questions about the strange town in the desert.