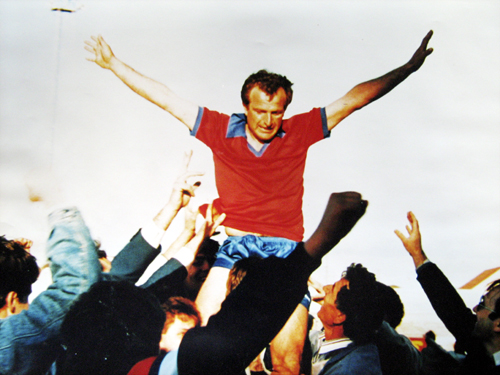 Dusan (Dule) Rusmir was born in Pacrac, Z. Slavonija, former Yugoslavia on 26 October 1953. Dule was the fourth child in a family of five to Dusanka and Radovan (deceased).

As a child Dule was extremely studious and a high achiever, he did extremely well at school but his real talent and love was soccer.

His talent on the soccer field was apparent from a young age and at 15 his skills were identified by talent scouts while at boarding school in Belgrade (capital of Serbia).

From there he signed his first professional contract at 18 for OFK Belgrade in the Yugoslavian premier division. He represented the Serbian under 19 state side and his excellence on the field earned him a place as one of 40 young athletes chosen to represent Yugoslavia at the opening ceremony at the 1972 Olympic games in Munich. The honor was even more distinguished by the fact that he was the only soccer player chosen and also included the under 21 European Basketball champions. His trip to West Germany was cut short by the Munich Terrorist attack and he and the other young athletes were forced home in fear of their safety.

On returning home he was growing impatient at OFK Belgrade as despite his great talent he was unable to establish a regular place in the starting line up. It was from there he transferred to Maribor in Slovenia but before he could play he was drafted for national service at the age of 21. His former club OFK had been able to postpone his national service for 3 years and this was not uncommon for professional athletes at the time.

During his 12 month national service he continued to excel as an athlete and he came first in the 1000 soldier 5km run. This was a race which was run during winter in full army apparel. His success was rewarded with a two week release from national service.

Following his return to Maribor he played just one season in the season of 1974-75 where again his talents were quickly appreciated by several opposition clubs including Rudar Velenje, who were quick to sign him from Maribor.

His time at Maribor brought him Slovenian cup success and he represented the Slovenian state side in national competitions.

To put some perspective on playing for Serbia and Slovenia these states are today Countries in there own right who have played in the World and European cups respectively. It was while Dule was playing for Rudar Velenje in 1977, he met his future wife Zdenka. In 1978 Dule and Zdenka married in Velenje 2 years later they had their first son Alen.

In 1983 the young family migrated to Australia, although Dule was 30 and was told he may never be able to play again at a high level due to a serious injury he was offered a playing visa to join Beograd (now known as White City Woodville)  in Adelaide. His older sister was already in Adelaide and while on holiday he made a guest appearance for Beograd and they just had to bring him despite his injury which he kept hidden.

At the time Zoran Matic was coaching the Beograd team and he later went on to Coach Adelaide City to 3 National League titles.

Dule started working in the building industry but of course continued his love of soccer, playing for Beograd between 1983-1988. His time playing for Beograd is considered by many to have been the best period in the clubs history. In 1983 they won the S.A. premier (then Rothman’s) league with Dule finishing as top scorer with 13 goals from midfield. However his biggest highlight came in the now legendary 1986 West End Cup Final against arch rivals Adelaide Croatia.

The game was poised at 0-0 until the dying minutes of extra time when Dule found the back of the net between a crowd of players in the penalty area. He was carried off the field by the Beograd supporters after the victory (see photo above).

In 1993 the family up and moved home to Coober Pedy to be closer to their other family members here in Australia. In 1994 their second child Sonja was born in Coober Pedy.

While in Coober Pedy Dule became a big part of the community, he was at one point in time President of the Serbian Orthodox Club, he spent many hours coaching soccer to the young people, and generally just helping others.

People who knew Dule knew he would go out of his way to help others, he was always rushing around town fixing somebody’s fence, helping someone move house or whatever was needed.

Dule was the sort of person you could rely on, he had a huge heart and was extremely generous. He was also known around town for his love of food and for cooking spits or BBQ’s. He would always volunteer to cook the BBQ be it for his family gatherings, friends’ birthdays, or a community event. Most recently he and his brother Dragan cooked up a lamb spit for the Father’s Day celebration in town.

Dule was extremely social, he was always at community events talking with people, and he was able to mix with all walks of life. He loved Opal Mining and being his own boss. Unfortunately it was this job which he loved so much that tragically on the 20 November 2008 took his life.

No one would have ever thought that this would happen to Dule. This tragic incident has left the family devastated and without their loving husband and father.

Since the accident the family has been overwhelmed by the support they have received from the Coober Pedy community.

The Rusmir family would sincerely like to thank the Coober Pedy Community for all the wonderful support they have received following this tragedy.

The family could not have got through this time without the support of the abovementioned businesses and people. Coober Pedy is only a small community but a very close community and the family acknowledges everyone who showed their sympathies and condolences through this time. The outpouring of cards, phone calls, visits etc was unbelievable.

The number of Coober Pedy people who made the effort to come to the funeral was also exceptional and really made it that little bit easier for the family knowing that Dule was so well loved and respected.

Zdenka Rusmir wanted everyone to know that she loved her 16 years living in Coober Pedy, she said, “I would have had only good memories of Coober Pedy if this accident had not happened. I loved my time in Coober Pedy we knew everyone and it was a close community which I enjoyed and I will miss it.”