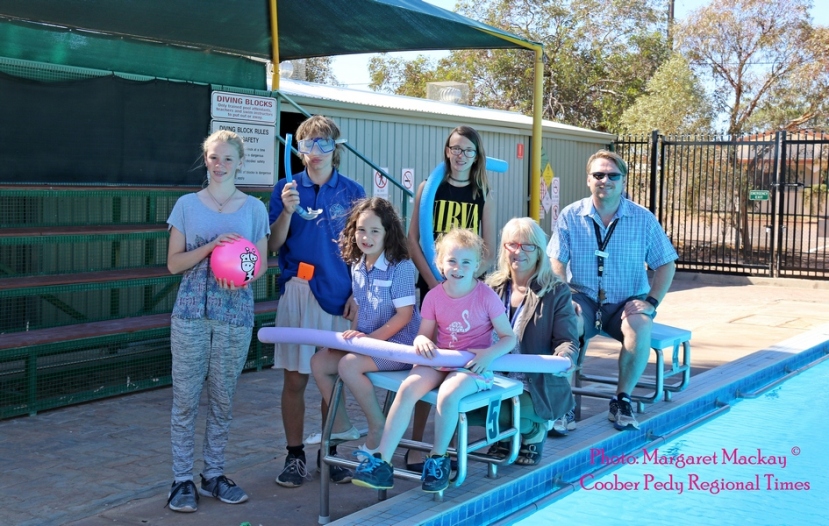 Pool Manager at the Coober Pedy Swimming Pool Anthony Prizzi (right) with local youth and helpers, anticipating the opening of the pool on Saturday

With temperatures set to soar into the high thirties next week, the Swimming Pool at Coober Pedy will open to the public at 1pm on SATURDAY 10th DECEMBER, 2016.

Preliminary discussions between the Department of Education (DECD) and the Coober Pedy Council have resulted in an interim agreement being signed on Friday morning.

Mr. Eddie Huges MP (Giles) announced earlier in the week that the State Government would arrange appropriate funding to enable community use of the pool between 10 December 2016 and 29 January 2017.

After the 29th January when school resumes, a longer term contract with the Education Department and the DCCP will be implemented

This week Ross Treadwell Executive Director of Infrastructure for DECD, was in Coober Pedy to assist with swimming pool negotiations. Discussions between DECD and DCCP have resulted in an agreement being signed at council today.

The agreement is subject to a number of conditions including that the funding coming from a DECD contingency fund will be administered to the Coober Pedy District Council on a reimbursement basis.

1. The swimming pool will be open for use by the community in line with standard
opening times as has previously been in place.

2. DECD will meet all costs associated with the maintenance and chlorination of the
pool.

3. DECD will meet the costs of cleaning the pool and all other areas used by the
community when the pool is in use.

4. Council will ensure the pool is staffed by appropriately qualified people so that the
pool can be used and enjoyed safely by the community.

5. DECD will reimburse Council costs incurred in point 4.
During this time, both DECD and Council will continue negotiations around the new
agreement so that the pool can continue to be used by the community outside of school
hours for years to come.