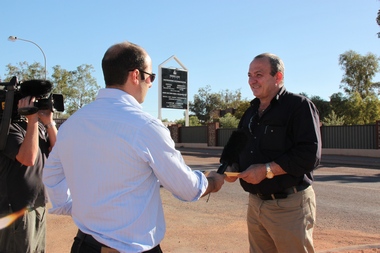 Robert Coro, Chairman of the Coober Pedy Retail, Business and Tourism Association is interviewed by Channel 10 on Tuesday in relation to the RAES cuts which will adversely affect all businesses and families in the 13 RAES communities

The leaked Sustainable Budget Commission Report or “Razor Gang Report” reveals that the State Government had full knowledge of the impact the reduction in the RAES subsidy would have on the communities and businesses in remote South Australia…and chose to tell no one!

The State Government knew that this decision would financially strangle businesses and residents in remote communities in (at least) September 2010 and yet they chose to consult with no one until March 2011. Why?

Minister O’Brien and even our Local MP, Lyn Breuer questioned the figures that the District Council of Coober Pedy presented to them in March 2011 claiming that they were incorrect. Yet their own budget report actually put the cost to consumers higher than Council’s estimates!

Following is an extract from Page 131 of the leaked “Razor Gang Report”:

The Remote Areas Energy Supplies (RAES) scheme subsidises the supply of electricity to the residents of 13 remote area towns. Agreements are being negotiated with the independent owners and operators in three of these towns. The cost of these agreements plus other non-fuel operating costs have been included in a separate budget bid and are proposed to be funded by a tariff increase.

This savings measure proposes to increase tariffs further to full cost recovery for all but small to medium domestic customers. The bid states that it is dependent on the approval of two budget bids, which have been submitted under the SBCC Critical and Unavoidable process: increased tariffs to fund non fuel cost pressures; and increased government funding for fuel cost pressures.

Tariffs under the RAES Scheme were last increased on 1 October 2009 by an average of between 9.3% and 10.2% for domestic, commercial and Commonwealth Government customers. This increase was undertaken as a result of on-grid electricity price increases, which the RAES tariffs are linked to.

Estimated impacts of the proposed tariff increases are:
– Small to medium domestic customers – greater than 25% cost increase, with a small number of domestic customers in Coober Pedy paying potential increases of 60% – 70%; and
– Larger domestic, commerical and general purpose customers – 120% to 190% increase within two years.

Mr. Robert Coro on behalf of businesses said, “discovering this prior knowledge of the impact cutting the RAES subsidy would have on our businesses and towns will only make us fight harder.”

Minister O’Brien, why did the State Government not consult the people of remote South Australia prior to the implementation of the RAES reduction when, despite your claims, your government had full knowledge of the social and economic impact it would have on these communities?

Lyn Breuer, where are you? Your ‘almost silence’ on this catastrophic issue is deafening to your constituents…