Between 80 – 100 travellers are currently stranded at William Creek event after torrential rains engulfed the far north over the past 24 hours.

Some of the stranded include visitors who travelled for the district’s annual Bronco Branding event over the weekend.

A further 30 – 40 travellers are holding up at the Pink Roadhouse in Oodnadatta where rain fell heavily in the region.

Peter Short Manager of the Department of Transport in South Australia said, “17mm were recorded at Innamincka while 40mm fell at William Creek, which is well above the average August rainfall for the area”.

Ross Field points to the sign on the Oodnadatta Track says all roads are closed. Photo: Adam Plate

“The ground is now saturated and 7 cars have been left stranded near Lake Eyre. It doesn’t take a lot of rain to close the roads but it takes a long time to dry out.

Basically everything up north is closed.  Innamincka, Birdsville and Coober Pedy to William Creek is closed and the William Creek to Oodnadatta and Marla roads are washed out”.

“Transport SA is assisting with trying to get supplies up to Birdsville for the Races.  We are also working with SAPOL at the moment regarding Road Closed enforcements”.

“Half a dozen vehicles have already left William Creek and headed off down to Marree on closed roads. Police will be issuing fines to those who embark on roads with Road Closure signs up, as was notified a few weeks ago”, said Peter Short. 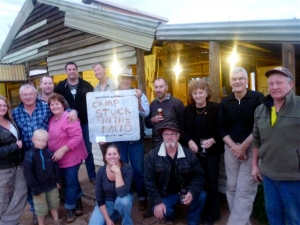 Adam and Lynnie Plate owners of the Pink Roadhouse said the wayfarers stranded at Oodnadatta have erected a “Camp Stuck in the Mud” sign, written in mud on a piece of metal and propped up in the open air kitchen in the Oodnadatta Caravan Park.

“The 35 – 40  travelling folk who are held up in Oodnadatta after 30 mls of rain are in high spirits”, said Lynnie. “All roads in and out of Oodnadatta, usually described as upgraded dirt roads, are  wet and muddy”.

The visitors have turned the camp kitchen into a communal meeting, eating and drinking room. Young Cooper (in photo below) is enjoying the camp meals. The group raised $100 for the RFDS (Royal Flying Doctor Service) last night.

“After two unscheduled nights in Oodnadatta, the travellers are looking forward to hitting the road again. They all agree their wet and soggy meeting has enriched their outback adventures”, Lynnie said.

Lynnie said that a few more travellers were held up at Arkaringa Station, 90 kms away, due to the wet roads. Arkaringa Manager Stephanie Williams won a few hearts when she turned up at the shed full of damp campers with a tray of freshly baked muffins today.

Mim Ward manager of William Creek Hotel said their supplies were already built up so things looked adequate for the moment. “We could be looking at a few days”.

“Tourists who hope to go to Alice Springs or Coober Pedy are coping well at the moment and seeming to enjoy the experience. They have been able to change their travel plans”.

“One tourist party arrived at 1.30 Sunday afternoon after being trapped in a creek crossing.

The travellers made it half way through the floods when the car stopped.  Somebody came out from William Creek and rescued the stranded occupants who are now able to brag about their adventure from the William Creek Hotel”.

More rain is expected for the Far North region during this week.