“As a result of Operation Climate Camp SA 2009 emissions protest at Port Augusta, Flinders Power agreed that the longest coal train in the world would not run on Saturday 26th or Sunday 27th September”!

However, at  approximately 10am Sunday morning 27th September, the “long coal train” from Leigh Creek  traveling to the Port Augusta power station laden with coal, derailed at the safety crossing in Copley, due to a technical fault.

Operation Climate Change respresentatives are now querying whether Babcock and Brown (Flinders Power) are flying in the face of their SAPOL suspension or whether SAPOL are simply paying lipservice to the public and environmental groups.

A spokesperson for the group said they are not buying into Flinder’s Power claim that the “weekend” suspension didn’t include Sunday. “It appears that our governments are not serious about reducing carbon emissions or supporting those in the community who are making this effort, with signs of Climate Change imminent”

Local residents in the Flinders Ranges believe the train that they saw derailed at the Copley crossing, heading south on Sunday morning, enroute to Port Augusta, to be 75 tonne capacity and approximately 3 km long – with 16.9 metres per carriage.  ” Thats at least 16.779 million tonnes of carbon dioxide greenhouse gases – PER day, to power the uranium mines and the Port Augusta and Whyalla Industries”, said one resident.

Prior to the arrival of any recovery team, a spokesman at the scene of the derailment told on the spot reporter Nellie Malseed that a part of the coupling broke off the coal train’s first engine and fell on to the tracks. As the second engine passed over the broken coupling it  destabilised  the coal train pushing it off the tracks.

The spokesman told Ms Malseed that they have 3 weeks stockpile of coal at Port Augusta, so there would be no impact on power production at the power station due to the coal delivery not being made on Sunday.

A huge crane travelled from Port Augusta to lift the heavily laden coal train back onto the rails on Sunday night under lights. Photo: Nellie Malseed

A crane from Port Augusta was ordered,  arriving at 7.30pm on Sunday evening to lift up and replace the engine back onto the tracks. Night lights were set up for the operation.

After a 12 hour ordeal  the coal train was back online and working again by 9.45pm allowing the cranes to return to Port Augusta. 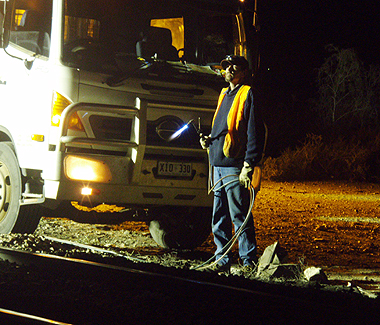 After a 12 hour ordeal, workers were able to repair damages and return the train to its tracks. Photo: Nellie Malseed

Rail workers then set about assessing the tracks and clearing broken wood and debris from the line. The distance between the lines still needed to be measured to determine if the derailment had bent the railway lines.

Concerns of a derailment of the Leigh Creek long train were highlighted in the media last week after 50 Camp Climate Change protesters presented a Community Decommission Order and 350 native flowers on Saturday morning outside the Port Augusta power stations.  Peaceful protesters were demanding that the aging,  inefficient stations be closed down and replaced with renewable energy.

The power stations had been declared a “protected area” under the Protective Security Act 2007 for the period of the Climate Camp.  Protesters marched two kilometres through the protected area to a point where they were stopped by 70 police including many mounted police and a canine unit.

A number of speakers addressed the crowd at the power station. After negotiations a small delegation of protesters were escorted by police to the actual front gates of the power station where representatives of Flinders Power failed to meet with the delegation to accept the Community Decommission Order.

The action occurred as part of a four day climate camp where a range of workshops were held to discuss  the science and politics of climate change, including the need for an immediate switch to renewable energy.    Participants emphasised the need for a just transition for workers in the region and that more jobs could be created in renewable energy than are currently provided by the power stations in South Australia. 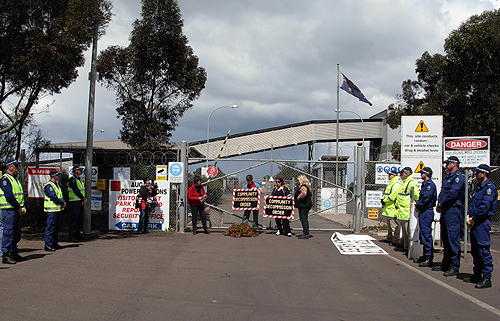 In the lead up to the international climate summit in Copenhagen, activists called on the Federal Government to scrap the Carbon Pollution Reduction Scheme, take measures to genuinely cut Australia’s emissions and switch immediately to renewable energy.

Julie Jordan, an activist with Climate Camp commented, “we’ve taken some important steps over the weekend to highlight the urgent necessity to switch off coal-fired power stations and engage regional communities in the necessary switch to renewable energy.

As a result of Climate Camp SA 2009 protest, Flinders Power agreed that the longest coal train in the world would not run on the weekend!

We will continue our campaign until the coal train and all coal-fired power stations are closed down forever”.

Reported and photographed by:  Nellie Malseed at Copley. Nellie is a 14-year-old student from South Melbourne, on location in the Flinders Ranges