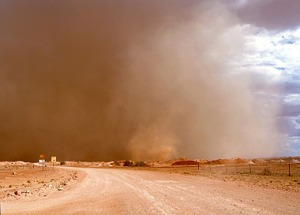 The second day of high velocity winds for the Far North of South Australia turned the Australian skies into a cloud of orange dust from coast to coast.

On the second day of gale force winds a massive dust storm gathered moment with strong westerly winds scooping up sand and dust from the Maralinga direction  in the Western Desert and spreading it across the country.

Strong and squally west to southwest winds averaging 60-70 km/h, with gusts in excess of 90 km/h, are expected with the passage of a low pressure trough today. Widespread areas of raised dust inland. Isolated thunderstorms are also possible in the area south of about Roxby Downs. Locations which may be affected include Port Lincoln, Whyalla, Ceduna, Roxby Downs, Leigh Creek and Moomba.

The State Emergency Service advises that people should:
* Move vehicles under cover or away from trees;
* Secure or put away loose items around your property.
* Stay indoors, away from windows, while conditions are severe.

Warnings are also available through TV and Radio broadcasts, the Bureau’s website at www.bom.gov.au or call 1300 659 215. The Bureau and State Emergency Service would appreciate warnings being broadcast regularly.

Dust storm: nothing like this seen in 60 years
BY GABRIEL WINGATE-PEARSE

A Red Blanket of Sand Falls on Sydney