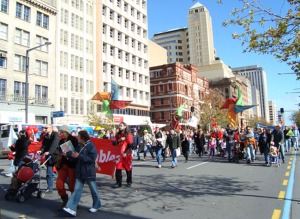 FoE Adelaide march with 1,500 others in Adelaide protesting against projected emissions by the expansion of the Roxby Downs mine

The Liberals together with Green and other independent Senators were able to barricade the legislation to defeat the Carbon Pollution Reduction Scheme
which the Federal government had planned to commence on July 1, 2011.

The scheme would have required approximately 1,000 of Australia’s heaviest polluters to cover 75 per cent of national emissions by purchasing carbon permits.

The collapse of Mr Rudd’s Carbon Pollution Reduction Scheme presents Australia with an opportunity to move ahead with meaningful climate action, the Australian Greens said today in a letter to the Prime Minister and Climate Change Minister, Penny Wong.

The letter calls on the Minister and Prime Minister to commence discussions with the Greens on a suite of measures to begin reducing Australia’s emissions immediately. This includes bringing on the Renewable Energy Target legislation on Monday and moving towards a renewable energy feed-in tariff, forest protection, clean transport and comprehensive energy efficiency upgrades.

“The CPRS would have locked in failure on the climate crisis with its inexcusably weak emissions target and its $16 billion handout to polluters. Three in four Australians support the Greens’ decision to reject the bill if the Government refused to toughen it up.

Is the house of cards finally crumbling?

The collapse of the CPRS opens the door to a suite of other measures that can be implemented immediately, before an amended CPRS returns to the Parliament, in order to begin reducing Australia’s emissions  with renewable energy and upgrading energy efficiency by shifting to sustainable transport and protecting the countries vast forest carbon stores.  Renewable energy has equal potential to both repower Australian and create  tens of thousands of jobs.

Australia’s renewable energy industry has been used as a political football for too long according to the Greens with both old parties bending over backwards to sandbag the old polluters.  The Australian community wants a renewable energy powerhouse.

The letter, from Senators Brown and Milne to Prime Minister Rudd and Minister Wong, sets out the Greens’ proposals for an amended emissions trading scheme, as well as complementary measures on forest protection, renewable energy, sustainable transport and energy efficiency. The Senators have invited  the Government  to immediately engage in constructive discussions with the Greens on this proposal, in order to create meaningful action on the climate crisis.

Will the Greens prove themselves effective  climate change leaders?

Many Australian’s who are unsatisfied with the lack of genuine consultation on environmental concerns, believe that this will be a serious test for the Greens to truly prove that they too don’t have all the answers and are in fact capable of working with the people.  Many individuals through frustration have implemented their own effective method of cheating climate change.

Climate change in itself is creating a new economic priority where the “old party” sytem of profit at the expense of public health has become unacceptable along with political rhetoric where political parties plead “green” a few weeks before an election in order to skid across the line to waiting corporate partners and contriving polluters.  All industrial processes must be thoroughly investigated and acurately published.

Independent watchdogs may become part of a more realistic new world order, in cleaning up the ongoing holocaust of the industrial revolution which has clearly served it’s purpose.

All political party donations must be made immediately available to the public.  Public servants are simply that and must become fully accountable with the time fast approaching for all party policies to be laid out for scrutiny.