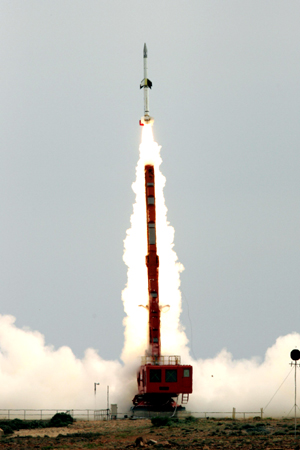 However, motorists travelling the Stuart Highway, between Glendambo and Coober Pedy and on the Coober Pedy to William Creek road have been reminded they are driving through a prohibited area and should not drive off the main roads.

DSTO has issued a warning for anyone who finds unusual items in the area not to touch the potentially dangerous objects.

In November 2006 DSTO signed a $74 million HIFiRE Agreement with the United States Air Force that would comprise up to 10 hypersonic flight experiments planned for the Woomera Testing Facility over the next five years.

He said the program, called the Hypersonic International Flight Research Experimentation (HIFiRE), was investigating hypersonics technology and its potential for next-generation aeronautics.

“Using nitrogen gas valves as thrusters to manoeuvre the test vehicle in space, the test vehicle was turned onto the correct heading and elevation for re-entry into the atmosphere as designed,” he said.

The HIFiRE project is worth about $70 million and is one of the largest collaborative ventures undertaken between Australia and the US.

Under the HIFiRE program, the test vehicle was carried some 200km into the atmosphere aboard a rocket launched from Woomera.

It then dived back into the atmosphere at high speed to test the hypersonic flight technology.

Mr Snowdon said the HIFiRE collaboration had already achieved some significant milestones in design, assembly and pre-flight testing of hypersonic vehicles and the design of complex avionics and flight systems.

“Hypersonic technology offers a quantum leap in speed and fuel efficiency for air vehicles of the future,” he said.

“Thanks to the work of this dedicated team of DSTO scientists, Australia is at the forefront of this technology.”

Defence, Science and Technology Organisation (DSTO)  entered into a partnership with the United States Air Force, the University of Queensland, Boeing and BAE Systems to develop the technologies needed for sustained flight at Mach 8.  As part of this project, DSTO is playing a lead role in applying the technology to air breathing “scramjet” (supersonic combustion ram jet) engines.

In 2007, DSTO’s pioneering scramjet technology was put to the test in flight trials at Woomera.

Hypersonic airplane could be a reality in the not too distant future that could make it possible for two hour flights from Sydney to London.

Hypersonics is the study of velocities greater than five times the speed of sound (Mach 5) and could have a significant impact on defence as well as on international transport and future access to space.