Is Tibby Quall  tackling a system, set up to fail for the Bloodline Owners of their own Land?  Is it economic progress before people,  at the expense of a successful  ancient civilisation? 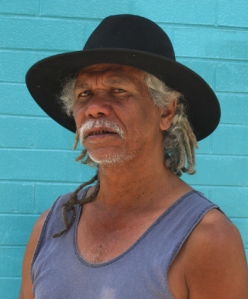 On Tuesday, the Darwin University Environment Collective (DUEC) held a Public Meeting regarding the proposed Inpex LNG development in Darwin Harbour. The meeting was attended by more than 30 concerned students, Traditional Owners and other Darwin residents.

Tibby Quall, a Dangalaba Larrakia Traditional Owner was the opening speaker. He told the meeting that he has been fighting in the courts for many years for a native title claim over an area including Middle Arm.

“As yet, I have not been consulted at all over this development proposal. There are heritage and sacred sites that must be protected and I am also very worried about the 3 parts to the proposed heavy dredging, one in middle arm, one in Point Charles and one in the middle of the harbour”.

Donna Jackson from the Larrakia Nation AC Governing Committee said, “Our natural and cultural heritage is under threat by a company that has no long term interest in our country other than profit. Darwin Harbour has a unique floral and faunal assemblage, still largely intact and likely to be a global attraction in years to come.

“The facts are that the Inpex gas plant will increase the NTs carbon emissions by a massive 50% or more. The company admitted this at a time when the Federal Government and governments all over the world, are looking to reduce emissions. We must act responsibly now for a better future and say no to Inpex”.

Dave Suttle, a member of DUEC added, “Gas may be better than coal, but this project does not replace any higher emitting projects, it only adds more emissions to the total. Australia is in a prime position to take the long-term economic advantages of a renewable energy industry, while securing the future of the youth of today”.

Save Darwin Harbour member Justin Tutty told the meeting that the massive Inpex LNG project is merely the next in a series of industrial development proposals threatening the harbour.

“In order to bring this West Australian project to Darwin, our NT government has deliberately violated conservation zoning, removed protections from the planning scheme and diminished the level of public participation in formal decision making.