Marathon Resources  announcement that work will recommence at the Arkaroola Sanctuary’s, Mt. Gee,  noted by Pirsa as an “inferred deposit” has caused grave concerns as to whether we have a government overboard, or the ambitious miner is simply stroking shareholders.

Mt Gee has been mined unsuccessfully in the secluded Flinders Ranges for approximately 40 years.  South Australians wait with both interest and disgust for a resolution to what appears an irresponsible thirst for minerals of any description, particularly in heritage areas which is almost everywhere, when uranium and the mining thereof is not a preferred option for Australians, neither are some of the offshore sales.

Greens MLC Mark Parnell says Marathon must not be allowed to resume exploration of any kind in the Arkaroola Wilderness Sanctuary.   The call comes as Marathon announced it will start more non-drilling exploration in the Arkaroola Wilderness Sanctuary from today, despite not even commencing rehabilitation of their old dump sites.

At this stage only a “Rectification Plan” for the clean up at Mt Gee has been approved and is awaiting instructions from PIRSA on a commencement date.

“How can Marathon be let back in to do more damage when they haven’t even started cleaning up their old mess?” asked Greens MLC Mark Parnell. “As any parent knows: allowing more mess to be created before old mess is cleaned up is a recipe for disaster”, Mark added.

In what seemed a premature and surprise announcement, the board of Marathon Resources released a statement this week reassuring shareholders that the recent decline in the price of the Company’s shares is not related to any change in the fundamentals of the company and that they believe the share price has been affected by the current external market volatility.

Marathon stated that their work continues on all non-drilling parts of their exploration activities and were to commence a gravity survey program at the Mt Gee uranium deposit (noted by PIRSA as an “inferred deposit”) in South Australia on Thursday.

After 40 odd years of futile mining at Mt Gee by what have been called “cowboy operators” that burnt shareholders tend to have forgetten, Marathon Resources said, “we believe there is potential for further mineralisation in the region of the Mt Gee deposit in EL3258 and this gravity survey will add to the evidence base of the uranium resource”.

The whole mining industry is watching the Government’s response to Marathon extremely closely.  So far, all they are seeing is minor consequences for major breaches of environmental standards.  To blithely continue exploration before completing any sort of basic clean up of past mistakes shows this company has still not realised how wrong their previous actions were,” Mark Parnell said today.

A great deal has been written on the mining of Mt. Gee or as some have said, “the stock exchange”,  which indicates the public as well as the mining community have an interest in how places like the Arkaroola Sanctuary and companies such as Marathon will be handled. In particular the message our government will be sending regarding a precedent to breach rules without penalty.  The non-penalty of Marathon’s extensive littering, damages and alleged theft of valuable fluorite,  still to be explained.  The question in the community has become, “why is the taxpayer’s dollar funding free water and mass destruction of heritage for mining companies with no respect for the people of this country?”

Mark Parnell has introduced a Bill into State Parliament to ban all mining activity in the Arkaroola Wilderness Sanctuary.  Cross-party support for such a ban is growing with prominent Liberals including Senator Nick Minchin and Iain Evans vocal in their opposition to mining in Arkaroola.

“Mark Parnell further stated, “Marathon behaved appallingly, were caught out and now the Government must show them the door for good.  They must not be allowed to re-commence exploration of any kind.  It’s time, once and for all, for the majestic and magnificent Arkaroola Wilderness Sanctuary to be preserved for future generations without risk of future damage from mining cowboys.”

Above: Map placed by request describing the Mawson Project Tenement also in the Arkaroola Sanctuary 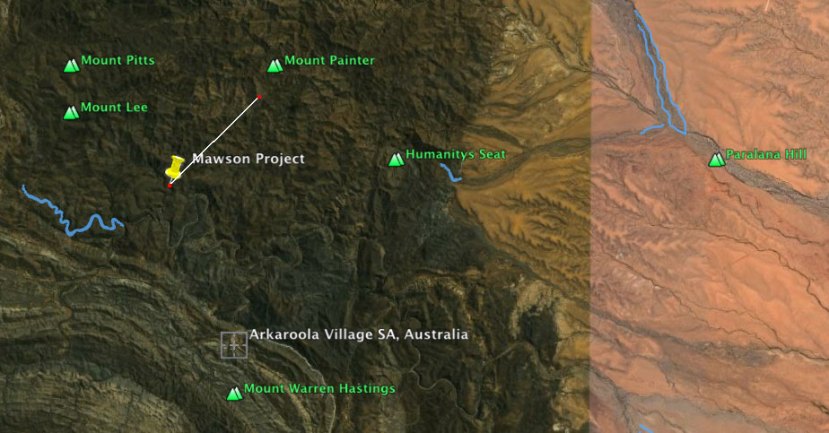