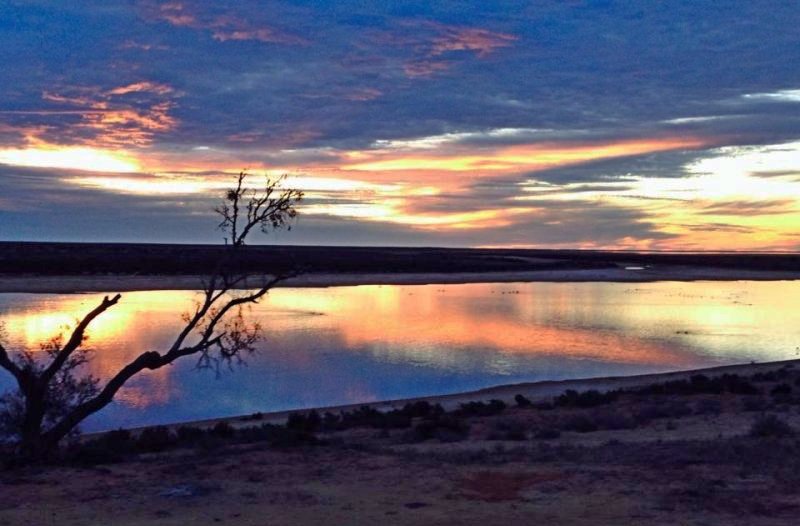 Manager of the Opal Inn Hotel & Motel in Coober Pedy Tony Pallotta said this week, “Water coming into Kati Thanda-Lake Eyre is a great boost to our region.”

“We are currently experiencing an influx of visitors, many of whom plan to take that once in a lifetime trip from Coober Pedy to see Kati Thanda-Lake Eyre as it begins to fill with water.”

“Historically Lake Eyre has filled up around 4 times each century to date, and due to the recent floods in Queensland the Lake and the desert will once again come to life during 2019.”

“Those who had Kati Thanda-Lake Eyre on their bucket list will not be disappointed as the water is beginning to flow in now and already attracting birds for the next breeding season,” said Mr. Pallotta.

Wayne Borrett of Arid Areas Tours, a local business in Coober Pedy that takes tours across to the Lake said, “The water flowing in from Queenland is coming from the north, and hasn’t reached the Southern end of the Lake yet.

“Although it is beautiful to go and visit Kati Thanda-Lake Eyre, the water is not visible from Halligan Bay as yet.,” said Wayne.

“Currently the best way to see the water is to take a scenic flight across the lake either from Coober Pedy or from William Creek”, he said.

“The Desert Cave Hotel in Coober Pedy, also owned by the Coro-Group is experiencing similar bookings in that many people traveling north this Easter are heading towards the Lake rather than say Ayer’s Rock or even Darwin,” Tony Pallotta continued.

“Visitors staying at our venues over Easter say they are hoping to catch a glimpse of native animals such as emus, kangaroos and dingoes in their natural environment.  The abundant supply of water at the creeks around the Lake will be an attraction for them.”

“For those driving, the trip to Kati Thanda-Lake Eyre is around 265 km. On the way across there is a camping ground at Coward Springs and also at Muloorina Station Bore,” concluded Mr. Pallotta.