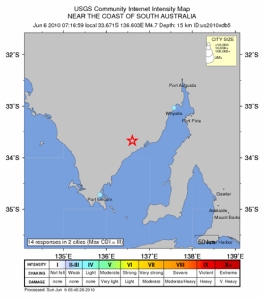 An earthquake measuring a magnitude of 4.7 occurred unselectively amidst coastal towns in regional South Australia early today, 6 June  2010 at  07:16:59 AM at its epicenter.

The earthquake severely shook a broad area, with residents reporting house shaking, items falling from walls and loud noise. It is believed there was an aftershock, however it is not yet confirmed.

The depth of this most recent earthquake in what appears a growing number of seismic events, was recorded as 15 km (9.3 miles) depth at its epicenter location.
The quake event occured precariously between suburban towns on the Yorke and Eyre Peninsulas in the South Australian Regional districts at 135 km (85 miles) NNE of Port Lincoln, 170 km (105 miles) SW of Port Augusta, 230 km (145 miles) NW of Adelaide. The earthquake occured 885 km (550 miles) WNW of Melbourne. 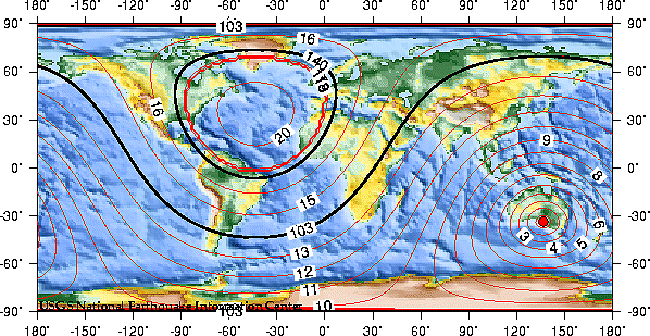 P-waves are type of elastic wave, also called seismic waves, that can travel through gases (as sound waves), solids and liquids, including the Earth. P-waves are produced by earthquakes and recorded by seismometers. The name P-wave stands either for primary wave, or pressure wave as it has the highest velocity and is therefore the first to be recorded.

It may be important to note that South Australia experiences earthquakes of a small magnitude almost every day.  Some areas may have weak crustal surfaces although scientists warned back in 2008 that faultlines in Southern Australia were in fact on the increase at this point in earth’s evolution.

The same scientists also warned and presented evidence that Australia was overdue for volcanic activity and that volcanoes were forming across the continent.

For more information on the growing concerns of reliable scientists regarding earthquake activity in Southern and South Australia, the following links may be useful.

More recently, and  although unpopular to mention, conscientious scientists are emphasising that many earthquakes are human induced.  While the actual cause of an earthquake can often take some years to determine, the United States Geophysical Survey who investigate the cause of earthquakes world-wide, have information available in their catalogs……

USGS/NEIC: Longwall roof-collapses and non-planned mining-associated rockbursts and mine collapses have been reported in regular USGS/NEIC earthquake catalogs if their magnitudes were of a size that they might affect estimates of seismic hazard in the regions in which they occur.

Some large and otherwise atypical mining explosions might also be occasionally listed in the regular USGS/NEIC earthquake catalogs.