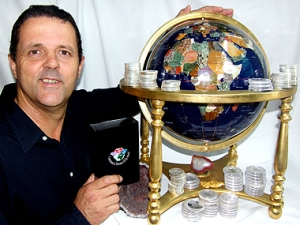 Wayne a seasoned opal seller believes that 99.9% of the world population has not had the pleasure of beholding an opal. “Traditional marketing has only targeted less than 1% of the world’s population”, said Wayne.

The Sedawie existing opals sites have sales of over 136,000 items sold, a combined value over US $5 million.

Coin collectors are numerous, with over 134 million collectors in USA alone so we can open new buyers to the opal market.

‘Why coins to sell opals?’ . “First opalauctions.com has developed a state of the art auction system for our opals which we could use to target high income buyers in the 45 to 55 year old age group”, says Wayne.

“The opal industry does to a good job promoting within the industry, but doesn’t promote effectively to new markets.

The Opal industry can be divided into two market segments. Firstly, trade shows all over the world has been the traditional method of promoting opals, however it does not bring in many new buyers.

Second, internet sales and marketing has been the most effective in reaching buyer globally as the web has increased world opal sales. However most sites market only to opal buyers, by buying key Opal search words.

In my opinion both these segments only market to those that are already converted to the enjoyment of opals”, Wayne continues.

“We started Treasures of the World Coins and Gemstone series, with combinations such as an Opal and a Kookaburra silver one ounce coin has already proved to be the most popular.

Perth Mint has produced 300,000 of these silver coins and has sold out within 6 weeks. Half the limited edition opal sets of 200 sets have already been sold and to some new emerging countries such as Kosovo, Rumania, Luxemburg and Brazil. These coin collectors now have an opportunity to have opals in their collections”.